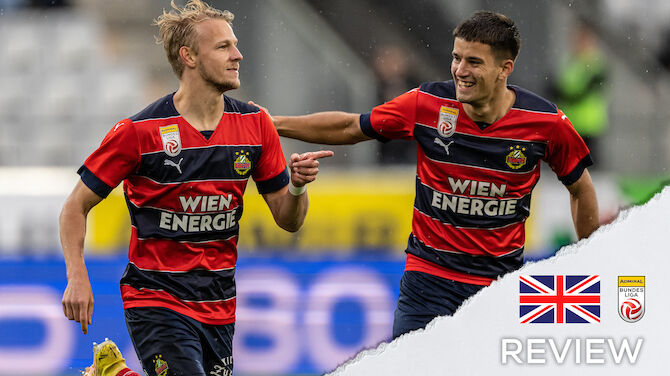 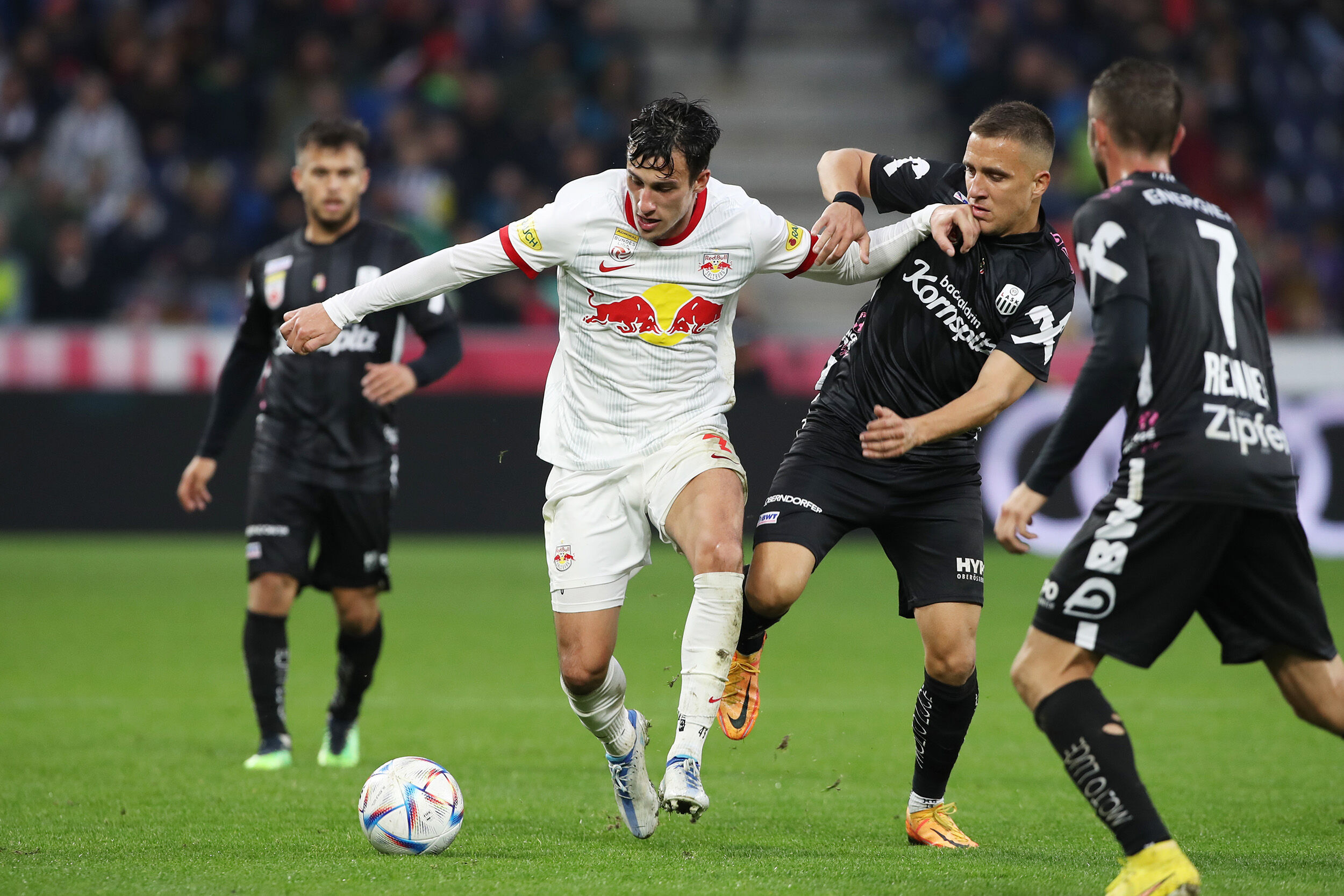 LASK were denied what would have been a tremendous away win in Salzburg, after Oumar Solet equalised six minutes into stoppage time as the league’s top two sides met on Saturday. Both teams had created chances in an even encounter, with Luka Sucic unsuccessful from five shots for Salzburg, before LASK’s Marin Ljubicic showed excellent movement and vision in the area to get on the end of a Peter Michorl header and flick the ball in for 1-0 after 78 minutes. The Croat now has seven goals from his first eight ADMIRAL Bundesliga appearances, something that only Geir Frigard previously managed in LASK’s history.

However, with Salzburg applying huge pressure to avoid a second defeat of the season, Ljubicic accidentally knocked the ball back towards his own area after 96 minutes, where Oumar Solet was able to lash in a late, late leveller and rescue the home team. An away draw should still be of some consolation for LASK, who slipped to third with 19 points, remaining four behind leaders Red Bull Salzburg.

Wolfsberger AC came out on top thanks to two second-half strikes in a game that could have gone either way in Lustenau. The guests got off to a great start as Thierno Ballo finished off a fine shot on the turn from the edge of the area just three minutes in, to record WAC’s fastest league goal for over 18 months. Austria Lustenau battled back, and they were level five minutes before the break when Stefano Surdanovic turned home a loose ball in the box for his first goal in front of the Lustenau fans, and his second for the club overall.

Despite good spells for the home team, WAC were ahead again just after the hour mark when Maurice Malone set up a long shot from Tai Baribo which curled in off the post, meaning he’s now scored in four consecutive games for the first time. Malone has also been involved in five goals in his first four Bundesliga games, something only Shon Weissman has bettered for Wolfsberg. Lustenau mustered a response with a well-worked equaliser, but it was chalked off for offside, and the result was put to bed when Thorsten Röcher also fired in off the post to make it 3-1 with under 10 minutes to play. WAC made it four wins from their last five games to move up to fourth, as Lustenau fall to eighth in the table. 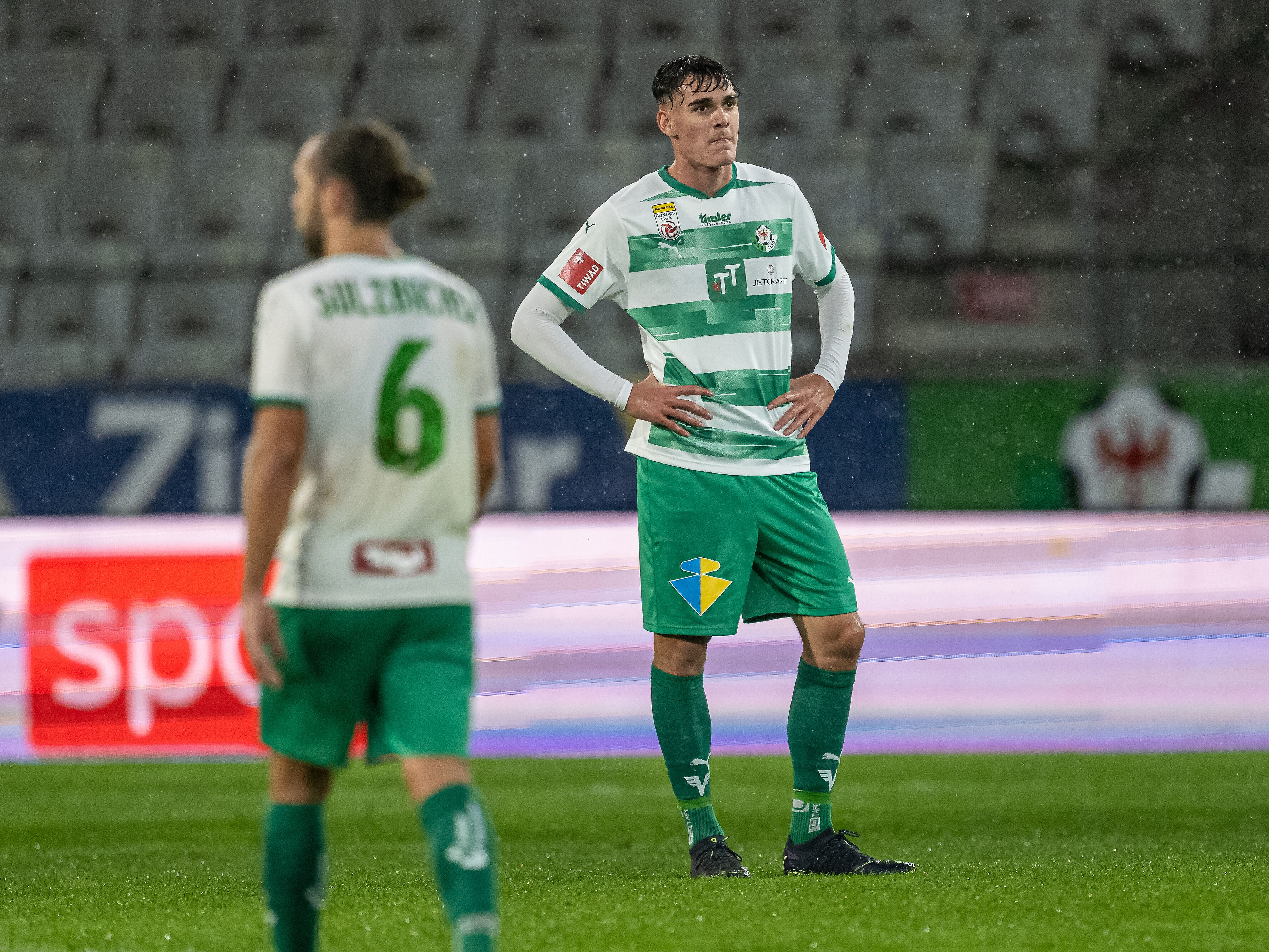 Rapid ran away with proceedings after the break against WSG, racking up five goals in the process to move back into the league’s top six. The away team opened the scoring on the verge of half time, when a long throw was knocked on towards Guido Burgstaller who converted at the back post for 1-0. It’s the second game in succession in which Rapid have scored following a throw-in; the last time that happened was back in 2012, when Guido Burgstaller was also the scorer!

In the second half, Marco Grüll doubled the lead with his sixth career goal against WSG, three more than he’s scored against any other team. Burgstaller added a third from the spot after Martin Koscelnik was chopped down in the box, before Thorsten Schick came on and set up two more goals on his landmark 200th Bundesliga appearance. Ferdy Druijf volleyed a cross in with perfect placement, before Bernhard Zimmermann headed in the fifth and final goal of the game. WSG did have the ball in the net at one point, but the effort from Nik Prelec was ruled out after an infringement in the play. Rapid move up to sixth with the points, one place ahead of their next opponents Austria Vienna, and WSG are in ninth place on 11 points. 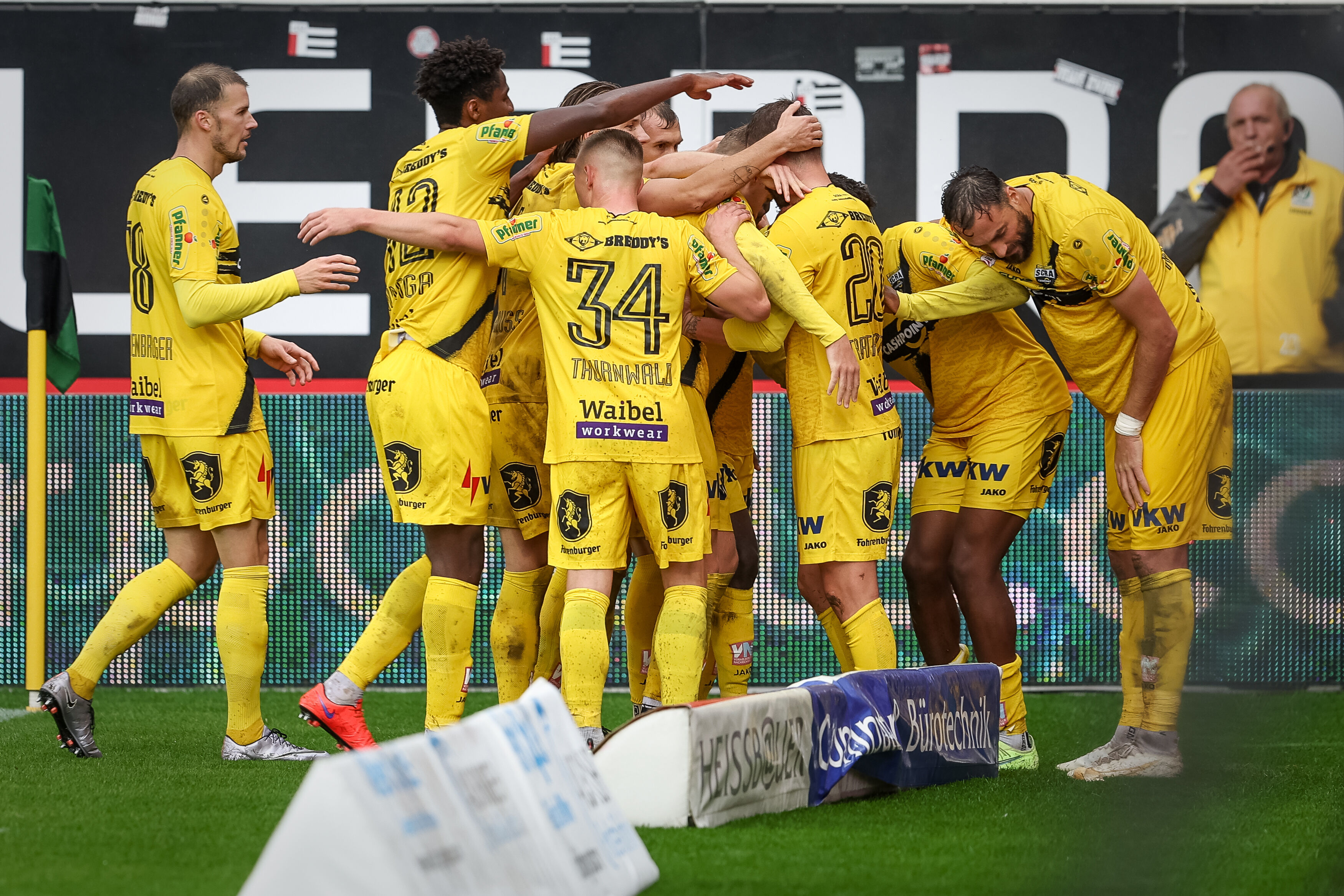 A rainy Ried played host to a five-goal thriller full of high-quality strikes on Sunday, as Altach claimed their first win since match day three to move off the bottom of the Bundesliga. Atdhe Nuhiu’s glancing header got Altach on the board after only four minutes; his fifth goal of the season matches last season’s total tally, and his fourth header of the campaign brings him level with the most anyone managed in the whole of last season (Giacomo Vrioni, 4). However, Ried came roaring back in front of their home fans, and just four minutes later Leo Mikic took advantage of some slack defending, and hit the top corner from near the corner of the area. A training ground corner routine after 24 minutes saw the ball floated out to Philipp Pomer outside the box, who smashed the ball in low with a stunning first-time volley for his second goal of the season - and surely his finest - as Ried turned the game on its head.

The action was far from over though, and Altach clawed it back to 2-2 following an accurate spell of passing on the counter, as Alexis Tibidi slotted in a third goal of the season, this one through the legs of the Ried keeper. With 20 minutes left, their own turnaround was complete thanks to Johannes Tartarotti, who let fly from distance and arrowed a shot into the far corner for his first league goal in just over two years. Ried had chances, but could not find another equaliser, meaning that they finished the weekend alone in 12th place, with Altach up to 10th.

Hartberg and Klagenfurt played out another entertaining Bundesliga encounter, with the guests needing a stoppage time penalty to claim a third-straight away win. Klaus Schmidt was missing from the home dugout with illness, and his bench will not have been happy to see Hartberg fall behind just three minutes into the game, as Andy Irving dribbled his way through the defence before his parried shot was turned home by Florian Rieder. Dario Tadic levelled from the spot after 16 minutes, converting his third penalty of the season, more than any other player. He also extended his club record further, with goal number 46 for Hartberg. After an injury to the referee, and a subsequent switch, Klagenfurt took the lead once more deep into first half stoppage time. Dead-ball dangerman Nicolas Wimmer flicked on a header into the back of the net for his third goal of the season.

Tadic turned assist provider after the break, and his high pressing led to his team’s second equaliser, after he won the ball back and squared for Rene Kriwak to knock in his first Bundesliga goal on his seventh appearance. Despite the best efforts of both teams, there were no more goals until the very last moment, when Patrick Farkas was penalised for handball, leaving Andy Irving to step up and win the game for his team from the penalty spot. Hartberg have now lost three on the bounce and they slip to 11th, Austria Klagenfurt move up to fifth place. 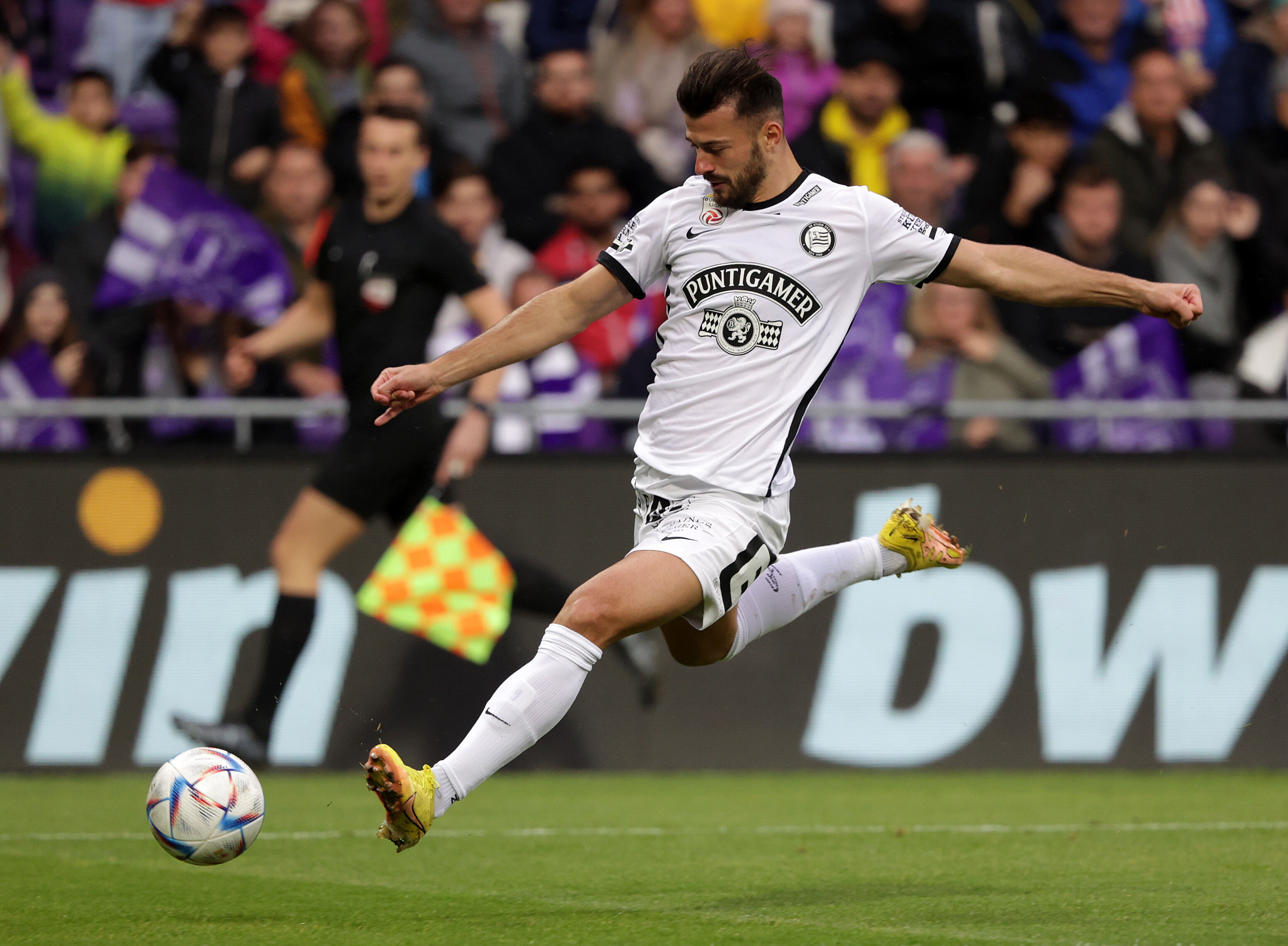 Sunday evening’s clash between Austria and Sturm ended up with a comfortable-looking win for the Grazers, as Sturm had some new goal scorers, and Austria were left to rue a number of missed chances. Swiss forward Albian Ajeti had already had one shot well saved before he opened his account with a strike from the right of the area following some crisp passing 14 minutes in. Alexander Prass had enough space to set him up with the final ball, his sixth Bundesliga assist coming for a sixth different team mate. Austria responded very well, and a sumptuous volley from Andreas Gruber was pushed away from goal right into the path of Muharem Huskovic, who should have turned the rebound in. Huskovic would be denied later by the Sturm keeper in a one-on-one, and the lively Dominik Fitz was also denied from close range by Siebenhandl, who had an excellent game overall.

After the interval, another good passing move played its part in the build-up to a Sturm Graz goal. Tomi Horvat had a shot blocked, but Sturm kept up the chase, and seconds later Amadou Dante played the perfect cross towards William Bøving, who put the ball in the net from inside the six-yard box for his first Bundesliga goal. In stoppage time, Mohammed Fuseini was able to tap in a third after Otar Kiteishvili’s effort was saved, meaning the visitors ran out 3-0 winners in a game which was closer than it appeared to be. The result moves Sturm up to second, two points behind Salzburg, and nudges Austria down to seventh in the table.