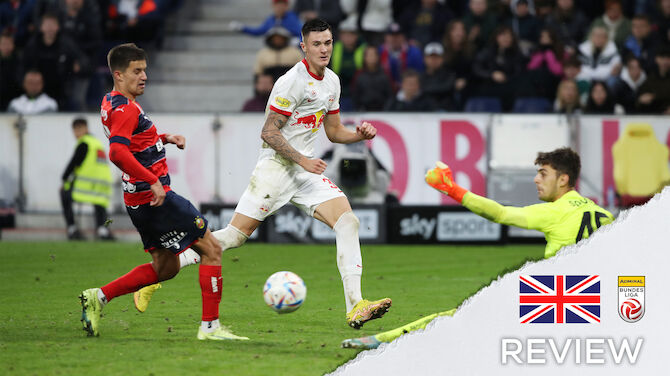 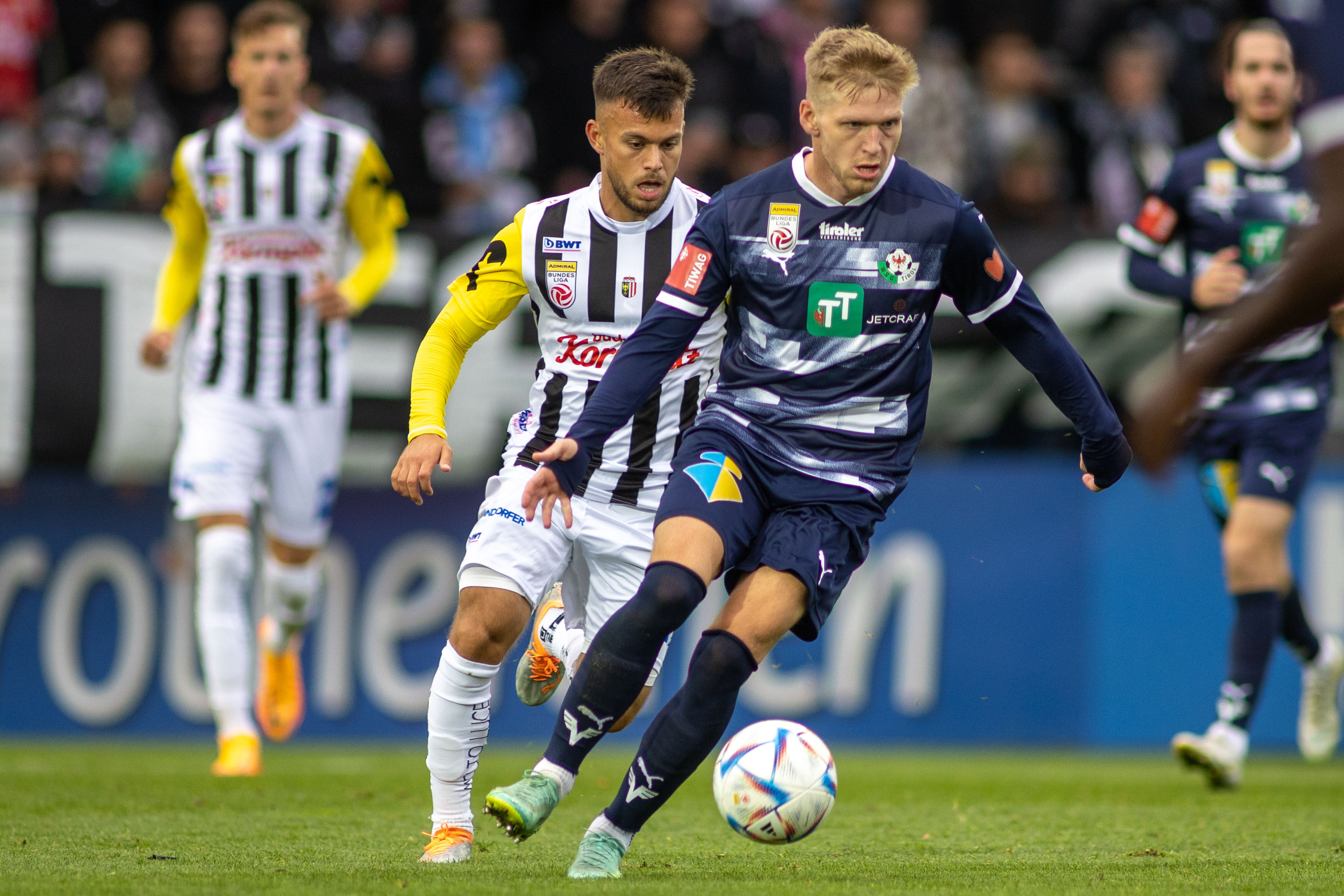 LASK’s winless streak extended to three matches as they suffered their first defeat of the season at home to WSG Tirol. It all looked to be going according to plan for the hosts when Keito Nakamura slotted home his sixth goal of the season in the third minute – the Japan international is now his club’s joint-top goalscorer with six goals, alongside Marin Ljubičić – but the visitors were level within 118 seconds. The equaliser was the first of three goals for Slovenian forward Nik Prelec, who became the first WSG Tirol player to score an away hat-trick in the Bundesliga. The other goal was scored on the stroke of half-time by Lautaro Rinaldi. The disappointing result leaves the Linzers, whose form has plummeted since Ljubičić’s dismissal and subsequent suspension, four points adrift of leaders Red Bull Salzburg, having been the early frontrunners. The Tyroleans, meanwhile, are now up to ninth position – four points clear of 10th place. 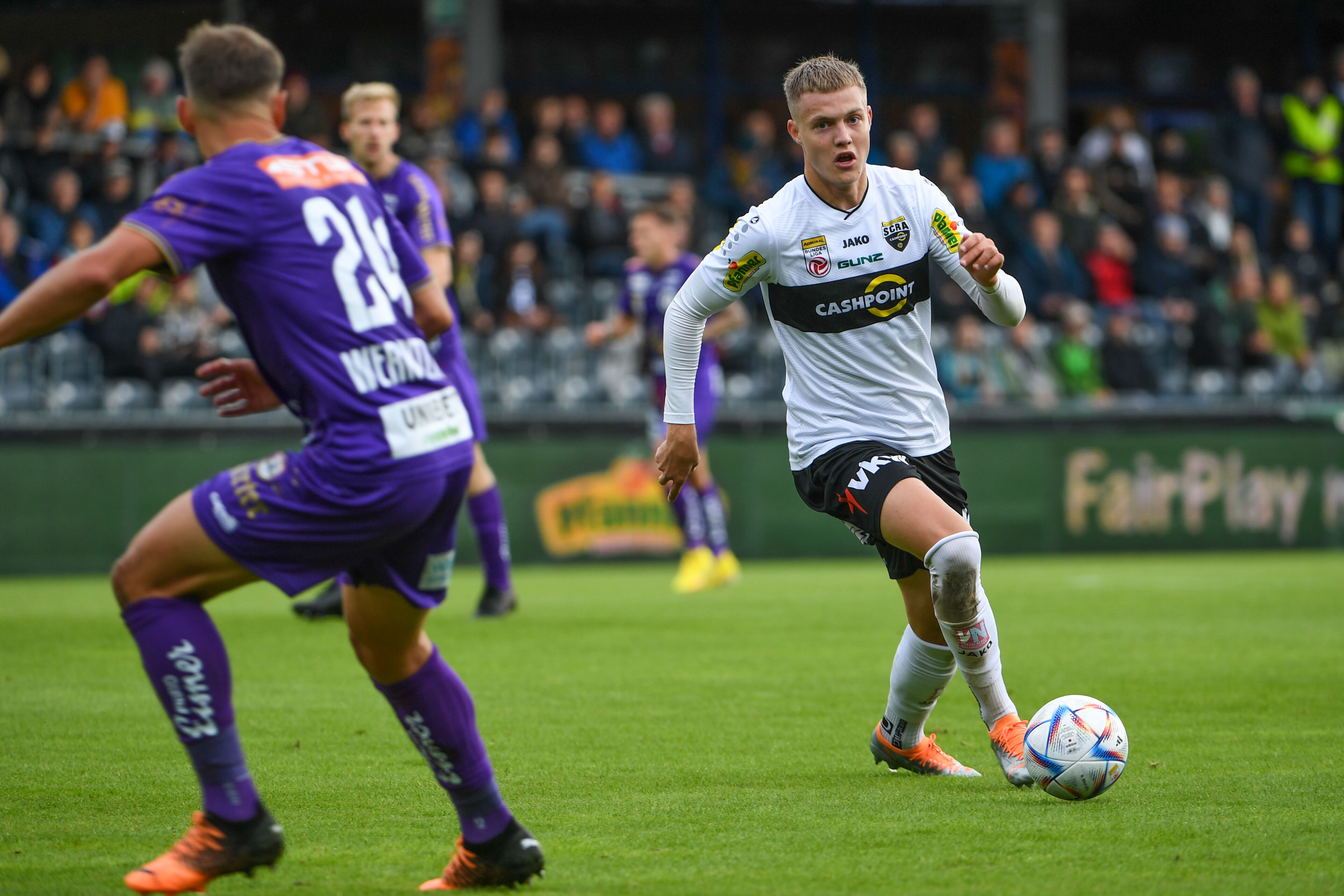 Markus Pink netted a hat-trick – his first in 185 Bundesliga appearances – and fired himself to the top of the goalscoring charts in the process as Austria Klagenfurt came from behind to demolish struggling Altach. Alexis Tibidi opened the scoring for the Vorarlbergers with a low effort inside the near post in the 39th minute, but Pink cancelled out that opener on the stroke of half-time with a header from close range. The Carinthians started the second period on the front foot and another Pink header put them ahead for the first time six minutes after the restart. A VAR decision to overturn a red card to Altach’s Pape Alioune N’Diaye, who was instead booked, marked the start of an intense final quarter-hour in which Pink completed his hat-trick and Solomon Bonnah rounded off the scoring in stoppage time. Peter Pacult’s side – one of four teams now on 11 points – sit in seventh, while Miroslav Klose’s men, who have won only one of their nine games this season, are bottom of the table on goal difference. 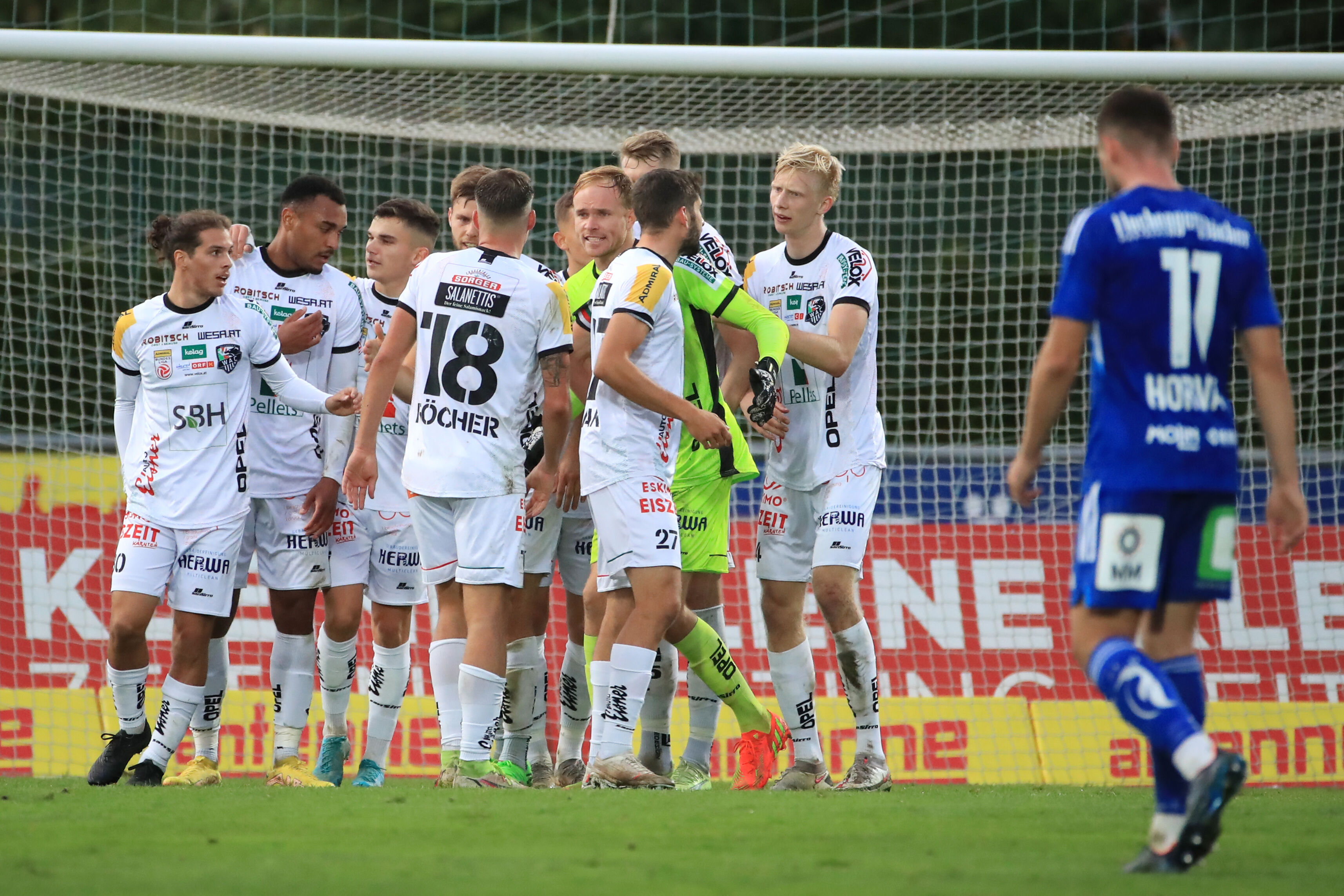 On a day of comeback wins across the Bundesliga, Wolfsberg bounced back from an early deficit to claim their first home victory of the campaign. The referee opted to award a penalty in the 24th minute when Matteo Anzolin scythed down Patrick Farkas on the edge of the box, with Dario Tadic coolly slotting home the resultant spot-kick to put Hartberg in front. But the Wolves, who have made a stuttering start to the season by their own recent standards, drew level shortly before the break when Tai Baribo’s looping header wrong-footed Rene Swete in the visitors’ goal. Swete was again in the thick of the action early in the second period when he made a splendid double save to keep out Maurice Malone, but Robin Dutt’s men eventually took the lead when Konstantin Kerschbaumer fired home following a penalty-box scramble. Thorsten Röcher’s stoppage-time goal made the points safe, as Wolfsberg moved up into the top six for the first time all season. Opponents Hartberg stay in 10th. 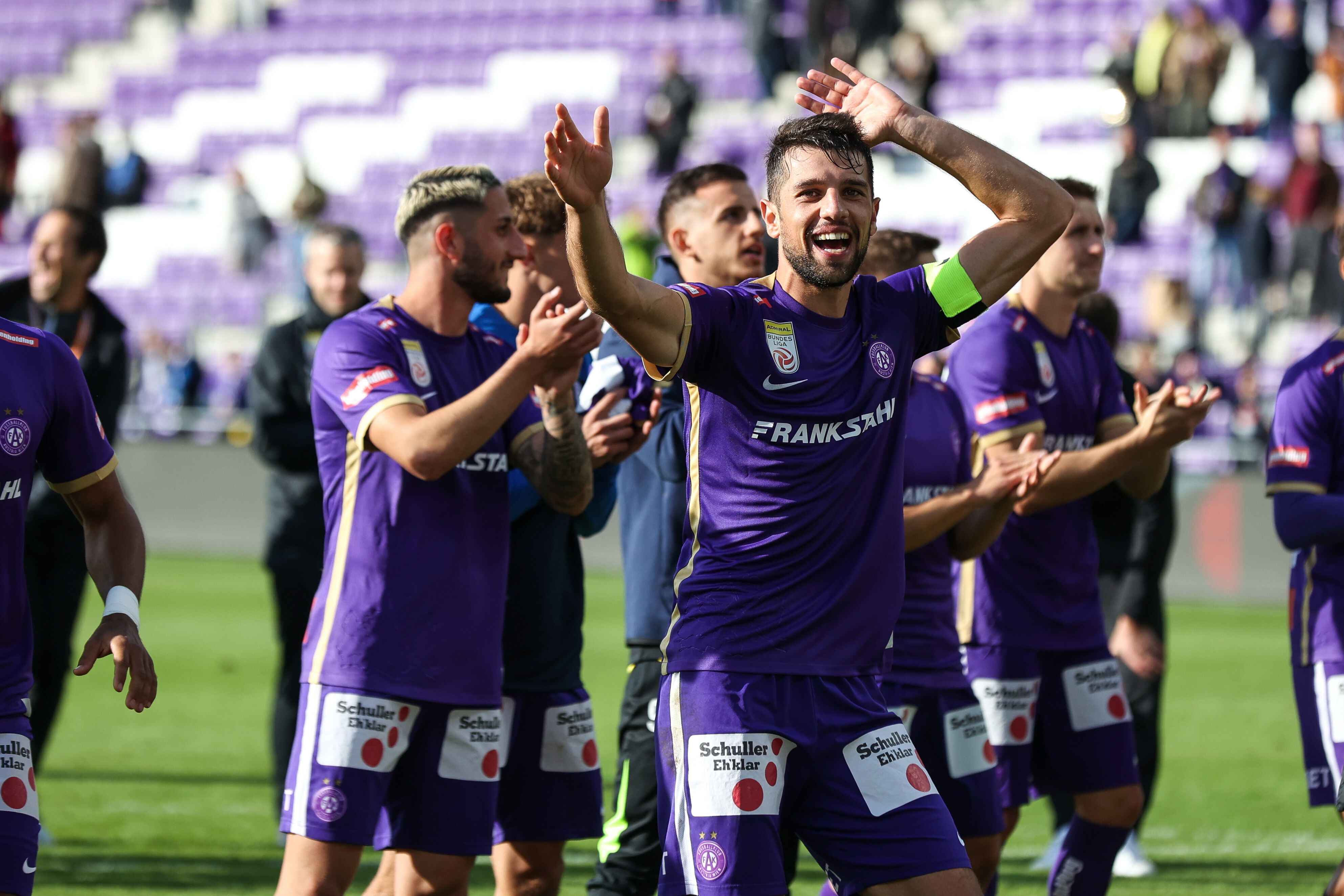 Austria Vienna plunged Ried even deeper into crisis with a comfortable 3-0 victory over the Upper Austrians at the Generali Arena. The Vikings had a good foothold in the match up until the 27th minute, when some route one football brought about the opener for the hosts: Manfred Fischer played a long ball over the top to Andreas Gruber, who took a couple of touches before firing past Samuel Sahin-Radlinger. With Ried’s resistance broken, the Violets surged into the ascendancy and came close to extending their lead when Muharem Huskovic struck the post before the break. But Dominik Fitz doubled the advantage with a curling effort into the top corner after the restart and Can Keles added a third midway through the half, as Manfred Schmid’s side extended their unbeaten run in the Bundesliga to six matches (W4 D2). They are now up to fourth place – despite having had three points deducted before the season – while only a marginally superior goal difference is keeping Ried out of last place in the table. 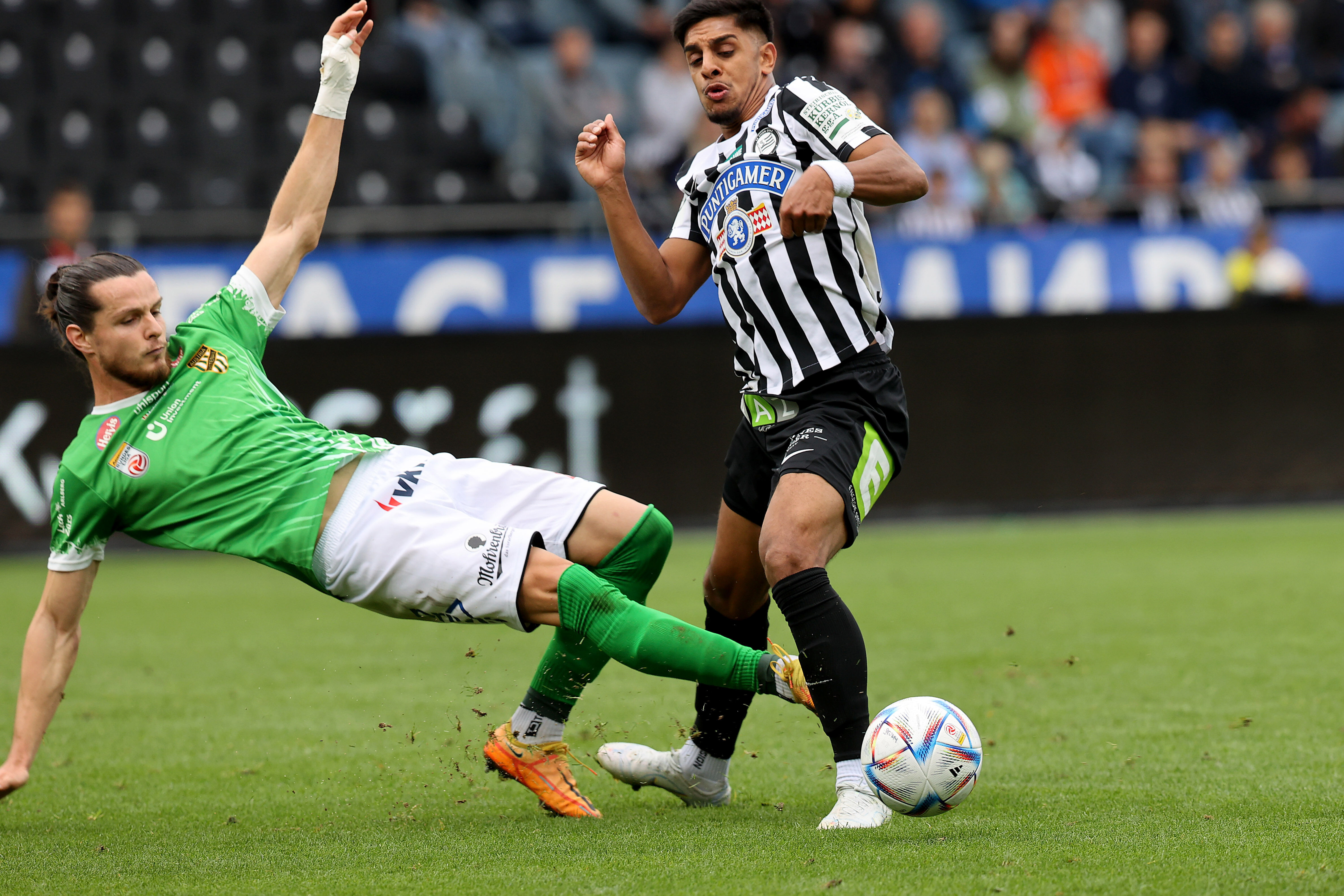 Two first-time goalscorers proved the difference as Sturm Graz bounced back from a humiliating 6-0 defeat to Feyenoord in midweek by beating promoted Austria Lustenau on home turf. Sturm, who are unbeaten in all of their 13 Bundesliga meetings with the Vorarlbergers, took the lead in the 24th minute when Alexander Prass directed a splendid strike from outside the box past Domenik Schierl in between the sticks for Lustenau to register his first top-flight goal on his 37th appearance. There were one or two chances for the visitors – with both Cape Verdean Bryan Teixera and Frenchman Yadaly Diaby both looking dangerous – but it was Christian Ilzer’s side who next found the net when substitute Mohammed Fuseini drilled in a low effort with six minutes remaining. Lustenau full-back Anderson was then sent off in the 90th minute for committing a foul on Fuseini that stopped the Ghanaian going clean through on goal. Sturm are now in third on 18 points, six clear of fifth-placed Lustenau. 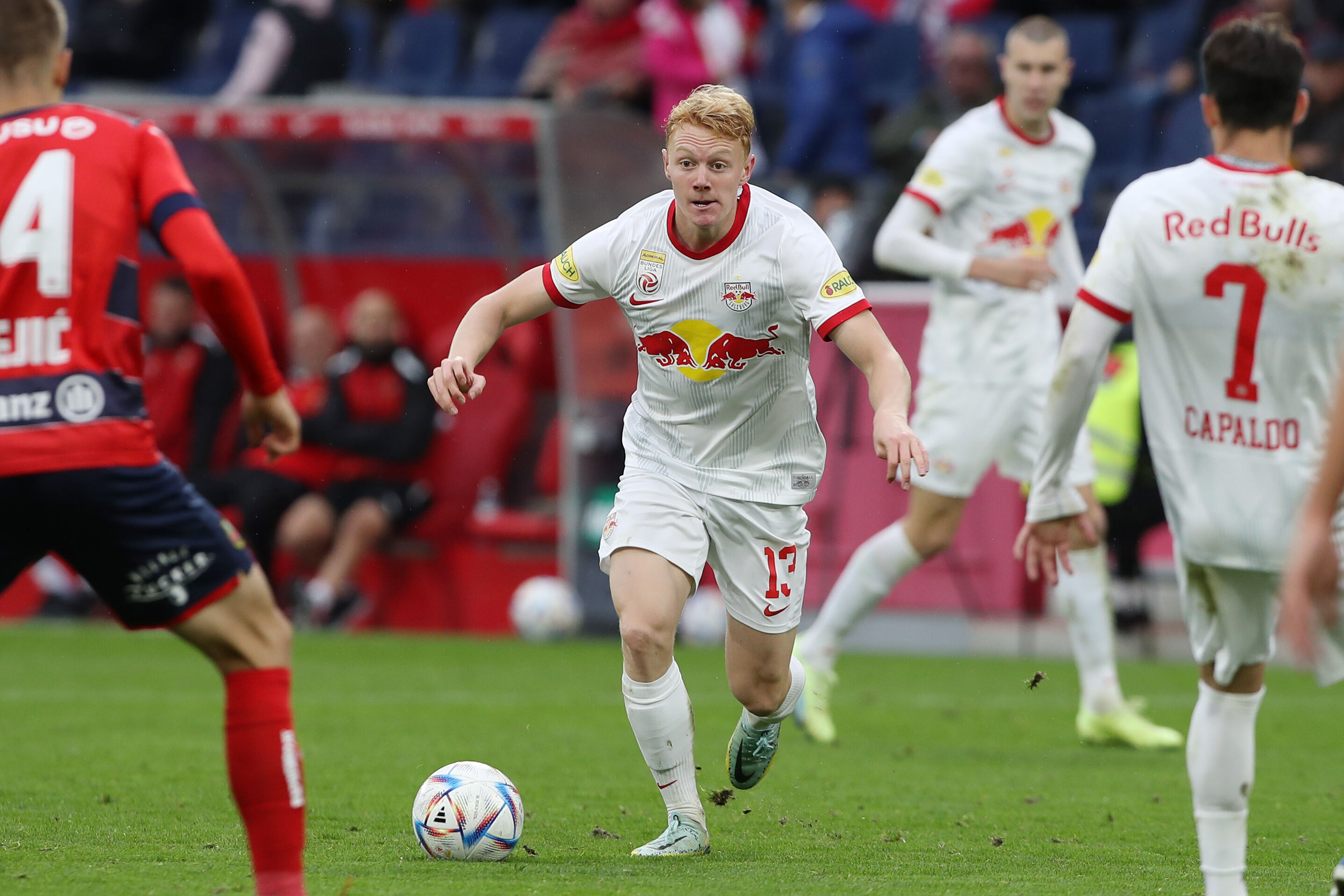 League leaders Red Bull Salzburg dropped points for the first time since Matchday 2 but still extended their lead at the summit to four points courtesy of a draw against eighth-placed Rapid Vienna, whose goalkeeper Niklas Hedl produced a string of outstanding stops to keep his side in the game. But the match got off to the worst-possible start for the Green & Whites, who fell behind within seconds of kick-off when Benjamin Sesko latched on to a ball over the top –Leopold Querfeld misjudged the flight of the pass and could not manage to head it clear – and opened the scoring after 17 seconds. But Querfeld made amends in the 21st minute when he controlled the ball in the box and made space for himself to fire a shot past Philipp Köhn that went in off the inside of the post. Roko Simic, who was making his starting debut for the Red Bulls, hit the bar with a second-half header and Hedl made several inspired saves, as the capital club held on for their first point in Wals-Siezenheim in five years.