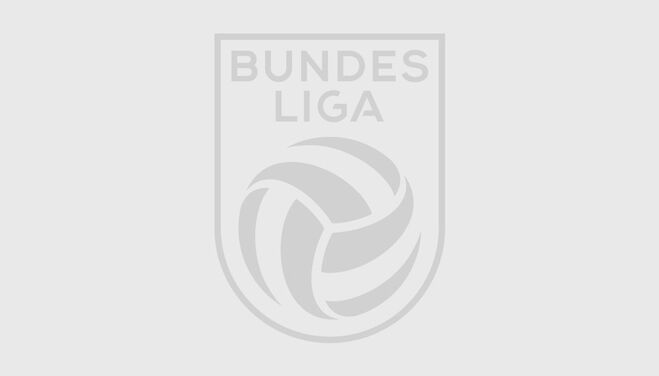 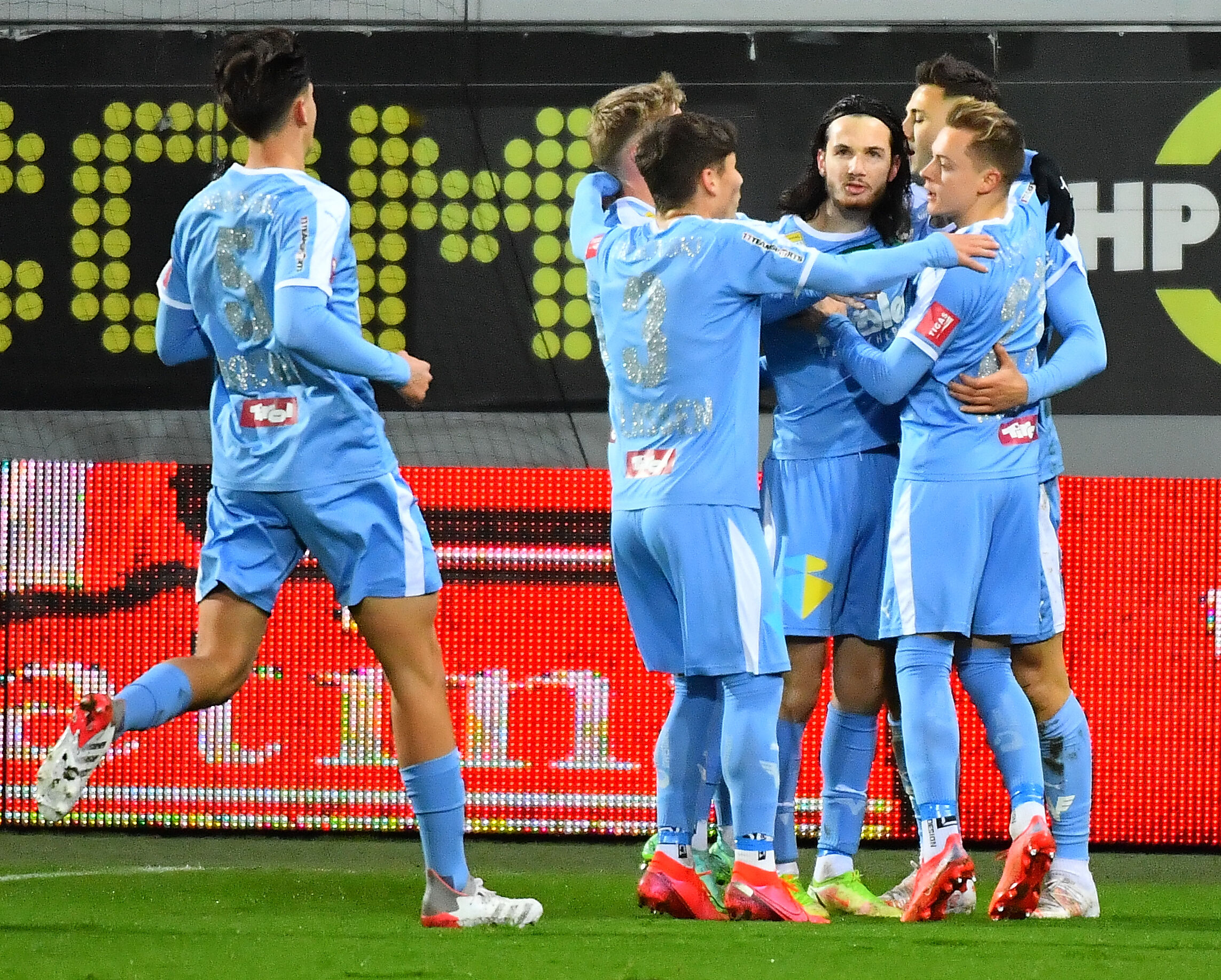 WSG Tirol’s march off the bottom of the table continued on Saturday with an excellent victory at Altach in the “Westderby”. Giacomo Vrioni’s second brace in consecutive matches, a coolly taken early penalty (12’) and an excellent finish rounding Tino Casali (88’), contributed to a thoroughly deserved win in Vorarlberg – continuing on from their 5-1 win over Wolfsberger AC. The Albanian loanee striker from Juventus has now notched nine goals this season, putting him joint-second in the race for the Golden Boot. Valentino Müller scored for a second game in a row (51’), a strike from outside the area, after scoring only one goal in his first 60 Austrian top-flight games. The Tiroleans now sit in 9th, only one point off the top six whereas Altach sit rooted to the basement of the table. 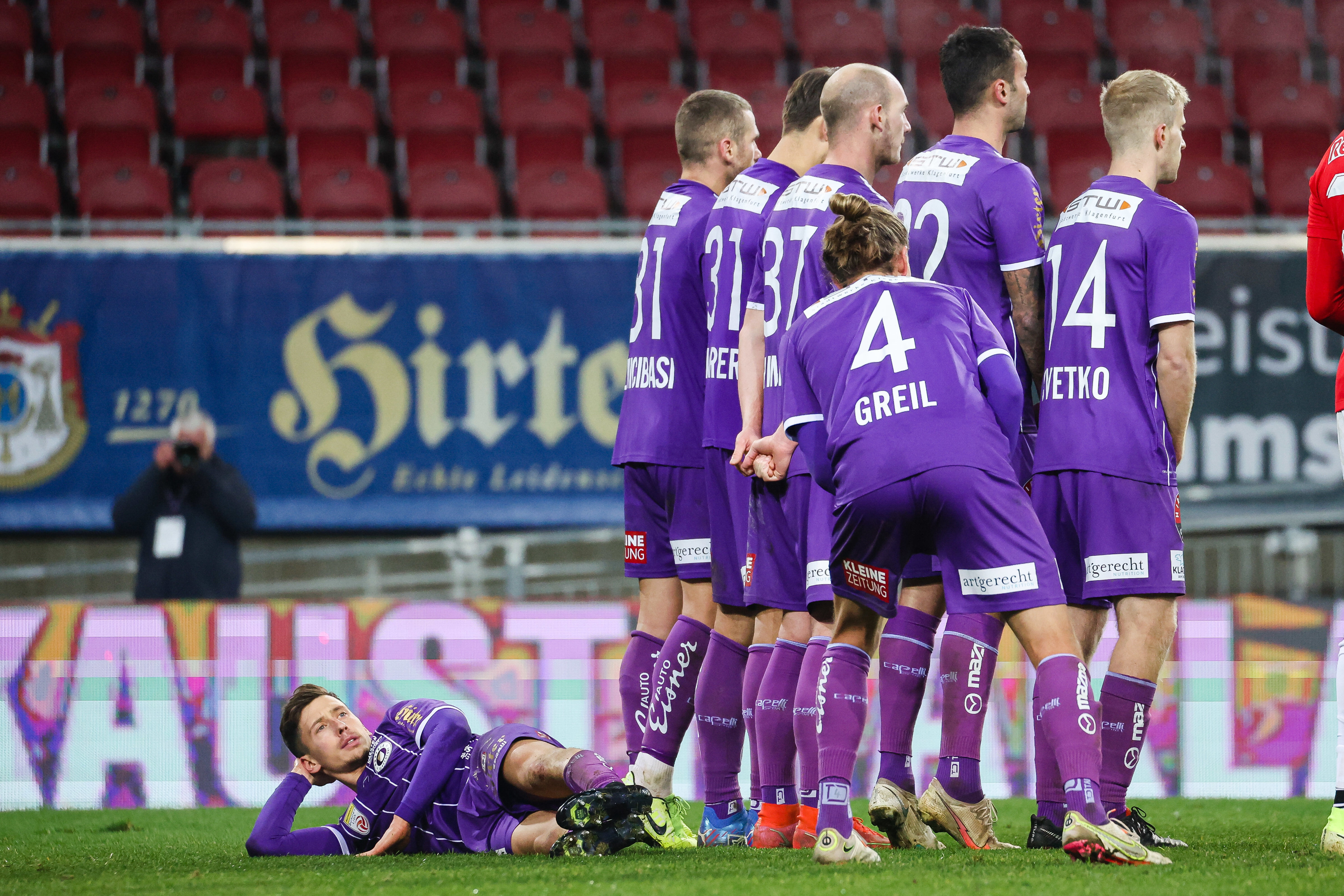 SK Austria Klagenfurt inflicted FC Red Bull Salzburg’s first ADMIRAL Bundesliga defeat of the season, and their first domestically since losing to WSG Tirol on April 21st, in a stunning result at the Wörthersee Stadion. Peter Pacult’s men fired their way into the lead on the half-hour mark via Turgay Gemicibasi making the most of a rare defensive error from the champions. As is customary, Salzburg produced chance after chance, and saw a Benjamin Sesko goal ruled out for offside during the first half. In the 80th minute, it looked like the Carinthians had sealed the win with Markus Pink’s ninth goal of the campaign (a new personal best), however, Rasmus Kristensen drilled the ball past Phillip Menzel in stoppage time for 2-1 to make for a nervy finish. The Violets held on for a famous result, keeping up their sensational unbeaten home record (3 wins, 5 draws) in the process and pushing them to fourth in the standings.

RZ Pellets WAC returned to winning ways with a hard-fought victory at a frigid BSFZ-Arena to maintain their second-place position in the ADMIRAL Bundesliga table. Michi Liendl’s third penalty of the 2021/22 season eight minutes from time made sure that all three points headed back to the Lavanttal Arena. Sebastian Bauer was adjudged to have fouled Christopher Wernitznig on the touchline and WAC’s main man slotted the spot-kick home with typical ease. Deep into injury time Philipp Schmiedl was dismissed for a reckless tackle on Jonathan Scherzer as the match-up ended with sparks flying. It now means that the Wolfsbergers are unbeaten in eight Bundesliga games against Admira – they’ve never had a longer streak against another team in their top-flight history.

FK Austria Vienna moved into the top six of the ADMIRAL Bundesliga after an excellent home victory against former manager Christian Ilzer’s SK Puntigamer Sturm Graz. Goals from 18-year-old Muharem Huskovic and 21-year-old Aleksander Jukic spearheaded Manfred Schmid’s young side to the three points. In between the two Austria goals, Sturm’s leading marksman Kelvin Yeboah saw a close-range effort bounce off the woodwork. With less than 10 minutes remaining, former Austrianer Manprit Sarkaria scored his sixth goal of the season (two of which has been against his former club), but it was too little too late as the Favoriten club held on for the victory to boost hopes of a Championship Group berth. 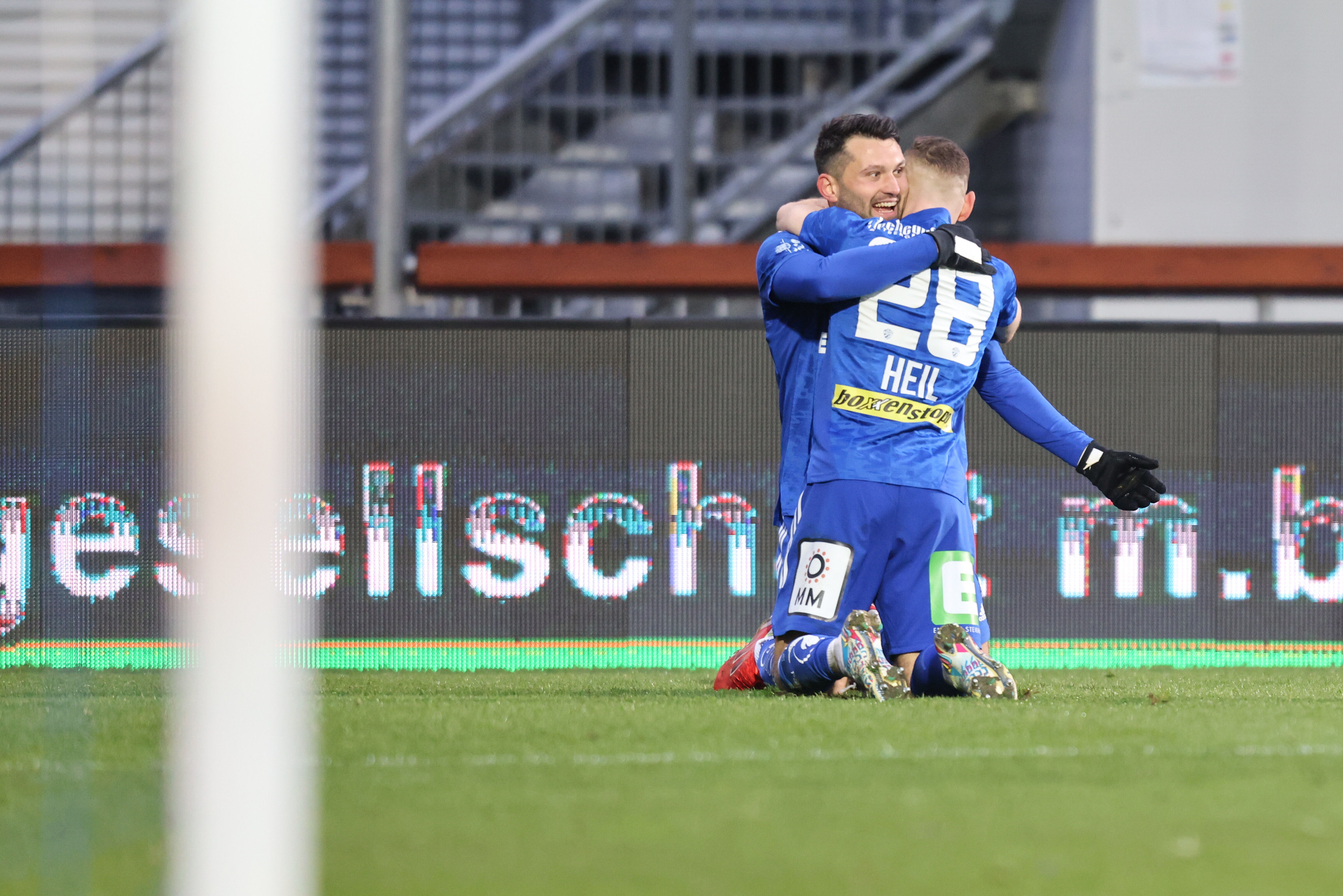 A last-gasp winner from Dario Tadic secured TSV Egger Glass Hartberg another memorable late win and continued LASK’s ADMIRAL Bundesliga woes. Despite excellent performances in the UEFA Europa Conference League, the Linzers have suffered blow after blow in the league and this was no different, outfiring Hartberg 7-21 on shots and enjoying a sizable amount of possession (39%-61%) but losing in dramatic fashion. Tadic had opened the scoring with less than 20 minutes to go, but Mamoudou Karamoko’s fifth goal of the season brought LASK back level with only five minutes left. Deep into injury time, the 31-year-old Tadic was in the right place for the rebound to score his 40th Bundesliga goal for the club – extending his own club record. The win puts Hartberg just out of the top six on goal difference, with LASK six points back in 11th position and in clear danger of missing out on the Championship Group. 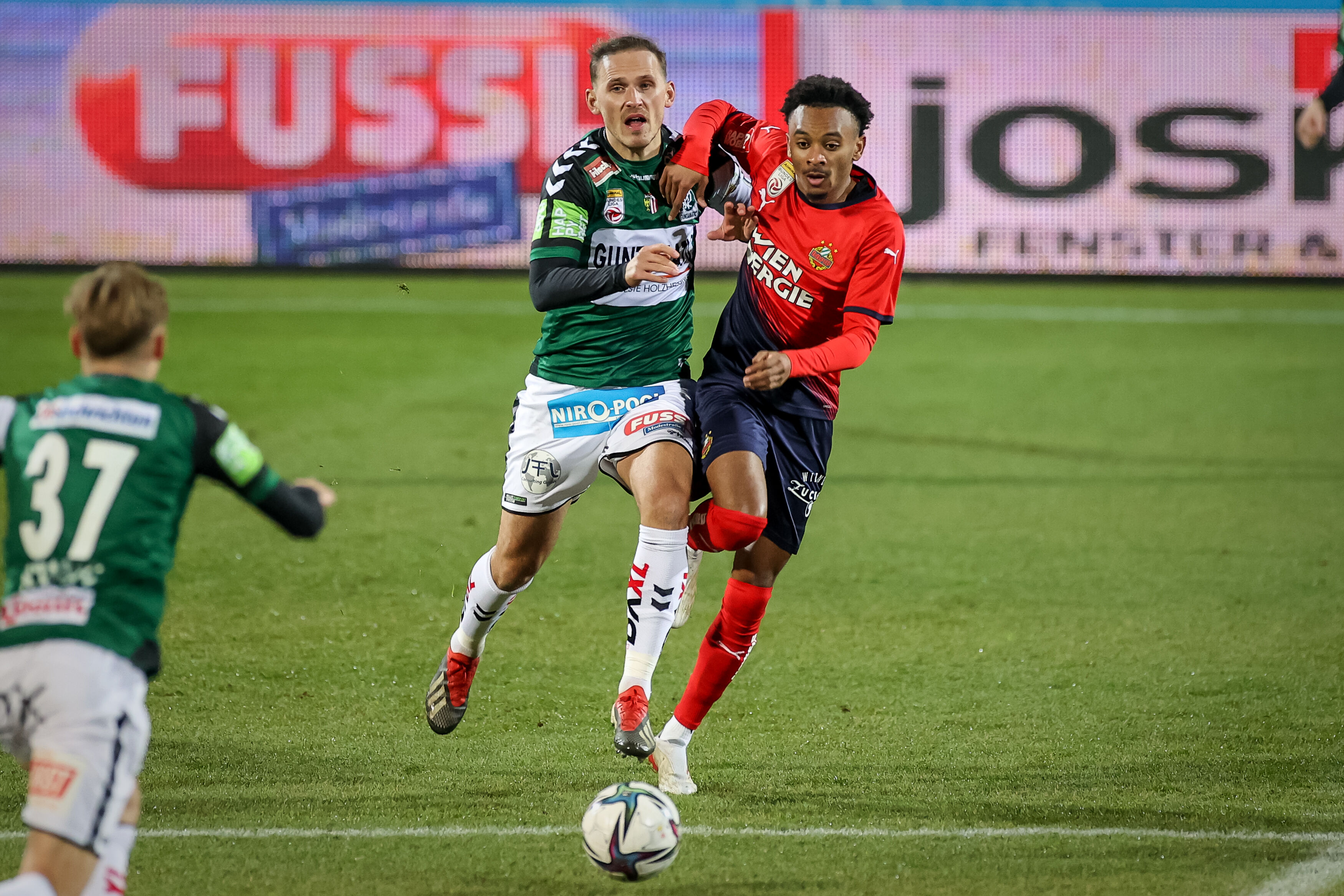 The final match of the Bundesliga weekend was a dramatic one as high-flying SV Guntamatic Ried and SK Rapid Vienna battled to a 2-2 draw. Minutes after the final whistle Ferdinand Feldhofer was confirmed as the new SK Rapid Vienna head coach and he’d have been pleased by the attacking display of his new club, who outshot the hosts 24 shots to 7 but it wasn’t enough for a victory. The visitors had taken the lead via Ercan Kara profiting off a deflection and volleying home from close range (11’), but Ried were level shortly after with the hapless Filip Stojkovic diverting the ball into his own net (26’) – the first time the Innviertel side have benefited from an own goal since 22nd November 2020, also against Rapid. Leo Mikic’s stunner put Ried back ahead with only 20 minutes remaining, but the Vienna side pressed for an equaliser and thought they’d secured it via Kara, but the Austrian international’s goal was disallowed by VAR. Step forward Christoph Knasmüllner who rose highest to equalise (85’) for his second goal of the season to rescue a deserved point.